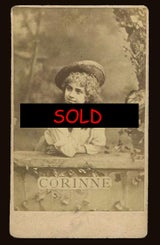 Corinne was the daughter of actress Jennie Kimball who was a actress in the theater between 1865 - 1873. She became the mother of Corinne, who the New York Times (1896) labelled “the most famous of all the child actresses of this country”.  It was  speculated that Corinne  was adopted as an orphan. Kimball trained her young daughter for the stage. Corrine debuted in the theater at age 2.5 yrs old.  At 5 yrs of age she played the part of “Little Buttercup” in the Boston production of “Pinafore”.  At fifteen years of age she was traveling as head of her own theater company. Jennie Kimball doubled as Corinne’s mother and manager.
sold 9-11-16

Sold Out
Add to Cart